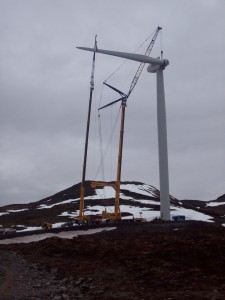 Construction began in June 2006 and the original 16 turbines plus 10 additional are now constructed and fully operational. The initial phase of civil engineering work consisted of road building to create the access route to, and foundations for a new 132 kV S/S required to export the generated energy. This work was undertaken by R J McLeod, a Dingwall based construction company.

Nordex AG was appointed as the Turnkey Contractor for the supply and construction of the wind farm. R J McLeod was appointed by Nordex as the civil engineering contractor for the construction of the roads, crane pads and foundations. Hydro Contracting (Evanton) were appointed as the Electrical Infrastructure Contractor. The turbines have been imported from Germany. They were shipped into the harbour at Kyle of Lochalsh then transported by road to the site. Nordex AG appointed specialist contractors for the transportation, erection and commissioning of the turbines.

In order to establish connection to the National Grid, Scottish & Southern Energy constructed a new, indoor 132 kV electricity sub-station, and a short section of wood pole overhead power line to connect to the existing nearby 132 kV circuit.